The Mountain Monastery of Montserrat 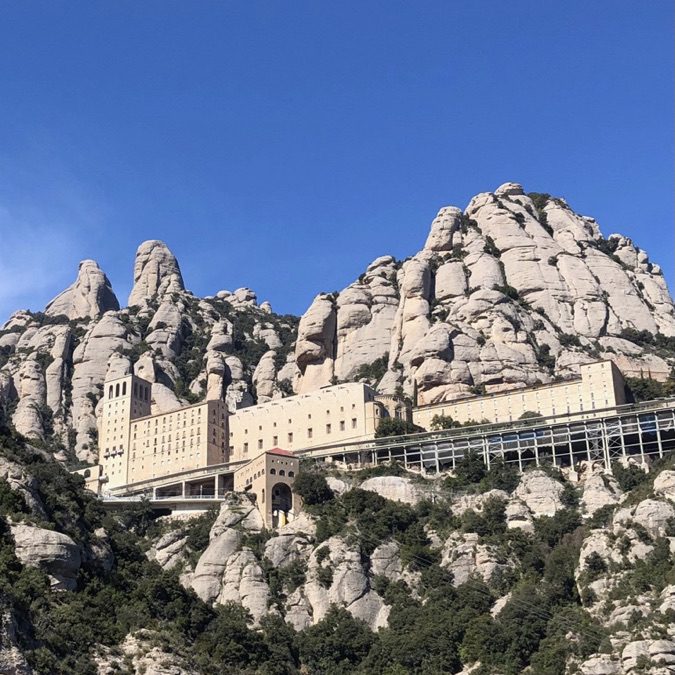 The Barcelona Feeling now offers a private tour to the mountain Monastery of Montserrat located about one hour away from the city. The day trip comprises:

The current Benedictine monastery was founded in 1025 in the middle of the iconic mountain that even in Roman times already had spiritual significance. Since around 880 there were already several hermitages dedicated to the Black Virgin.
During the Napoleonic Wars in 1811 the monastery was completely destroyed and also differed severe damage in the Spanish Civil War in the late 1930s. That is why the current outer façade is from the 1960s.

The church façade was constructed in 1901 whilst the cross on the altar was made in the 15th century. The central columns of the church represent the prophets Isaiah, Ezekiel, Daniel and Jeremiah. The historic pipe organ dates from 1896 and in 1957 it was moved to the presbytery. It is very deteriorated so a new pipe organ was inaugurated in 2010.

The publishing house of the monastery is one of the oldest presses in the world that is still operating with its first book published in 1499. Today it also houses a library with 350,000 books – many of them from the early days of book printing.

According to the legend, shepherds saw a light coming out of an – until then – unknown cave where they found the Madonna when entering it. They tried to move the sculpture but only managed to do so to the spot where she is nowadays as she suddenly became so heavy, nobody could move her anymore. So monks decided to build the monastery at exactly that place around her.

The Madonna you can see today in the church is actually a Romanesque sculpture from the 12th century. Her face turned black in the course of the time having been exposed to candle smoke. She was named patron saint of Catalonia next to Sant Jordi in 1880 by the Pope for her 1000th birthday. Usually there is a long line of pilgrims waiting to be able to praise the Madonna and touch or kiss her.

The Order of Saint Benedict in Montserrat

All Benedictine monasteries are operating autonomously and are run by an abbot. More than 70 monks are currently living in Montserrat. They are also called black monks in reference to their cloths. When becoming a monk one has to make three vows: The first one is the promise of stability. The promise to remain in the same order. The second vow is the obedience to the community superior. The final vow is to convert to a monastic manner of life.

The Barcelona Feeling offers private tours to the Monastery of Montserrat. A day trip out of town you should not miss during your Barcelona trip: Private Tour Montserrat Mountain & Monastery