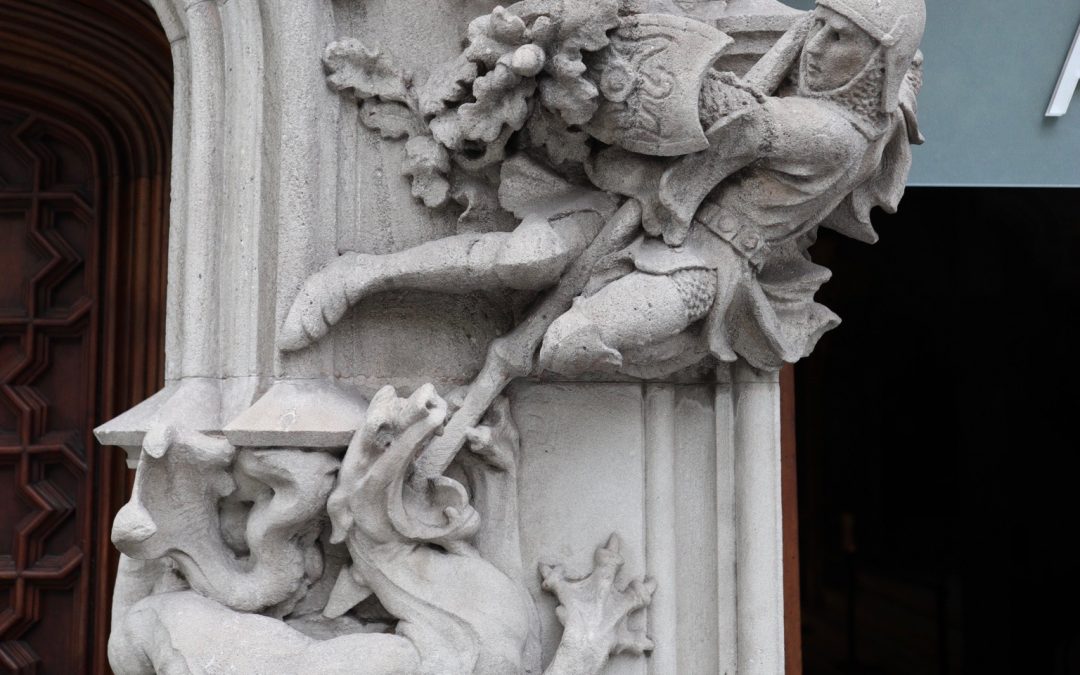 The importance of Catalan history and legends in modernist architecture

Many tourists are searching for things to do in Barcelona like a walking tour or a Barcelona bus tour. During the tour you will most likely pass by the grand boulevard of Passeig de Gràcia where you will see marvellous buildings: Gaudí´s Casa Mila or Casa Batlló, Casa Amatller by architect Puig i Cadafalch or Casa Lleó Morera by Domènech i Montaner. All these extraordinary buildings have something in common. Modernist architects used a lot of references to Catalan history, culture and legends.

What are these references about?

Puig i Cadafalch integrated a beautiful sculpture of Saint George slaying the dragon that is located next to the entrance of Casa Amatller (completed in 1898). Saint George – or Sant Jordi in Catalan – is the patron saint of Catalonia (as well as England) who rescued a virgin from being eaten by a dragon. On the 23rd of April Barcelona gets into a frenzy celebrating Sant Jordi day – a regional festive day in honour to the knight. It is a custom to give your girlfriend a rose – as Saint George picked one from a rose bush that miraculously grew out of the dragon blood and gave it to the young lady.

Gaudí chose a more symbolic approach when designing Casa Batlló a few years later. The whole façade and the roof are about the Saint George legend. The shape of the top of the building resembles the back of the dragon. The little tower with the cross symbolises the sword plunged into the dragon´s back. As the building is also called the House of Bones you will notice that the balconies have similarity to skulls. On the first floor especially the pillars resemble bones: legs with joints. Both are in reference to the poor girls that were eaten by the dragon before it was slain.

Maybe you did book a private tour and walked down Passeig de Gràcia and did notice the beautiful metal street lamps? Magnificently integrated into the benches made out trencadís mosaics on top of the lamp you will see a crown and a bat. The architect, Pere Falqués, placed the bat on all of the 32 lamps along the street to honour King Jaume I of Aragon to whom Catalonia belonged in the 13th century. The bat became part of the coat of the arms of the King after he reconquered the city of Valencia from the Moors. According to a legend the Count of Valencia had a pet bat. A prophecy said that as long as his bat flew around the city would be invincible. However, the pet bat got hypnotised by the golden dragon on the helmet of Jaume I and stopped flying. This way the king could conquer the city the next day and add the territory to his kingdom.

Why did architects make these references to Catalan history and culture?

At the end of the 19th century the thriving Catalan bourgeoisie and the political elite wanted to revive the idea of an own Catalan national identity. They invested a lot of money into young artists – not only architects, but also writers and composers – to create something truly Catalan. Often architects were given a free hand and could build without being limited. This also explains why you will find so many references to the glorious past of the region. The revival of the Catalan culture was crucial. There was no better way to perpetuate the ideas within the many building projects in Barcelona at that time.

Learn more about Catalan legends and culture in architecture during the private tour: Feel Like Gaudí – Tour & Workshop. During a two hour walking tour you get to know the details of above story and much more. Finish the experience with a hands-workshop and learn the mosaic technique that Gaudí used on so many objects!

In case you prefer a walking tour in a small group without a workshop we also offer our experience: Gaudí & Barcelona Legends. Learn more about the buildings along Passeig de Gràcia and discover many details that are hard to be spotted! Understand their meaning in the context of history.