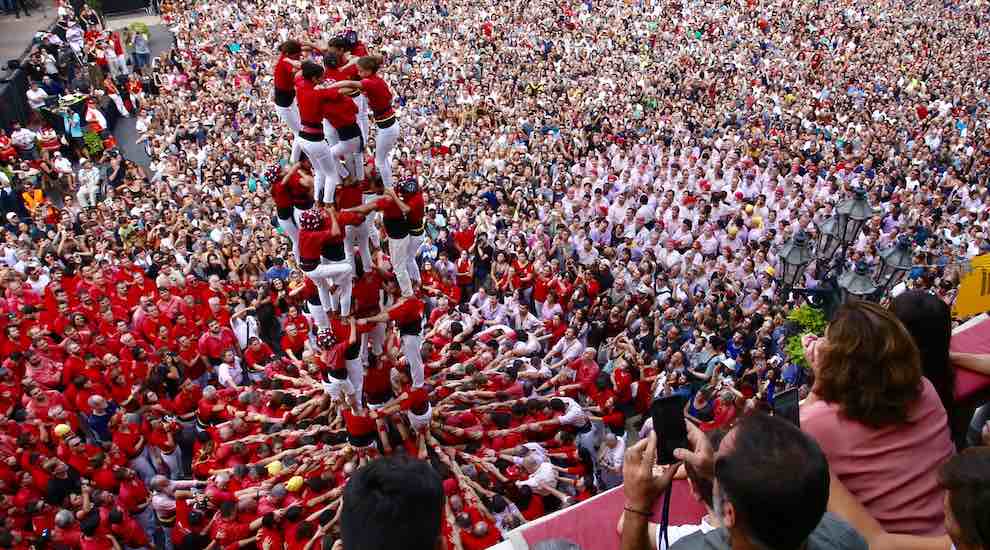 A Catalan tradition is building human towers – so called “Castells” which means castle in Catalan language. People build a pyramid by climbing on top of each other´s shoulders. The tradition goes back to the 18th century and originates in the Tarragona region. Rivaling groups of so called “colles” started competing in building the highest towers – seven or eight layers was easily possible.

During the Franco era the Castells were forbidden as the dictator oppressed all kind of culture in Catalonia and other region like Basque country. People were not allowed to speak their own local language neither. So only after the dictator´s death a revival of the tradition happened leading to more popularity than ever.

In recent times women have been allowed to become “Castellers”, too. This made it possible to add even one or two layers to the top of the tower due to the lighter weight. It also led to the start of the second golden age of Castells starting in the 1980s.

Probably another aspect contributed to the second golden age: the social element of building human towers. On the one hand the construction requires strength, coordination, balance, courage and mindfulness. On the other it also connects people from different age groups and backgrounds. Especially the younger generation has discovered the building of human towers as their new hobbies creating a boom in dedicated clubs like the “Castellers de Barcelona” (founded in 1969).

In the square, Plaça de Sant Miquel, just next to Plaça Jaume, you will find an interesting piece of art work related to the acrobatic tradition: A stylized version of a human tower. This monument for the Castellers was created by local artist, sculptor and author Antoni Llena i Font (born in Barcelona in 1943).

He wanted to create a monument twice the height of human towers, to represent the incentive to want to climb higher and higher. He also wanted to show the fragility and strength of a castle. The shape of this sculpture is inspired by metal mesh. The idea came up one day when the artist went to buy cava, the local sparkling wine or champagne. The caps of the bottles have this mesh. He noted that the material “would make a very beautiful abstraction on the human tower because it contains the idea of ​​cohesion, fragility, transparency”. So he took the cap to his studio and started working on his project.

During the La Mercé weekend (24th of September) when Barcelona is celebrating her patron saint in a sequence of festive days you will be able to see the Castellers live. They will be competing on Plaça Sant Jaume. If you are in the city you should pass by and enjoy the show!

Find out more about street art during our Barcelona private tour: Explore hidden streets with a friend. This historic walking tour through back alleys of the old town lets you discover more than the usual. Little streets and squares off the beaten path. Escape the crowds and enjoy hidden gems!