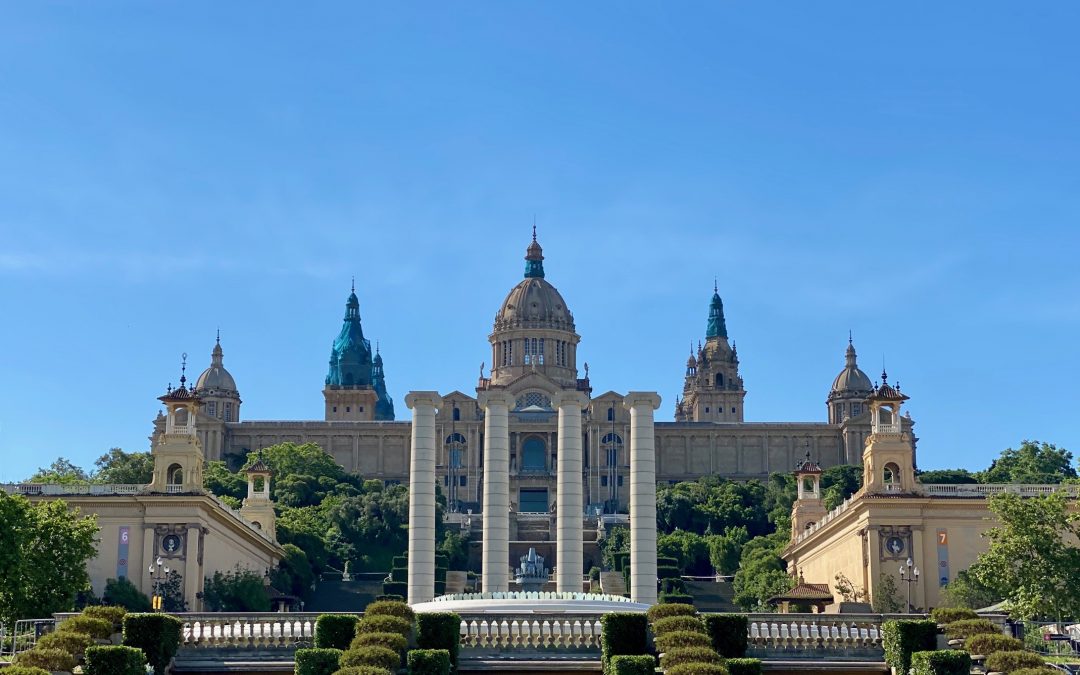 The iconic hill of Barcelona has been overlooking the city since its origins. Since Barcelona was founded by the Romans more than 2000 years ago, the hill has served as a natural watch tower for centuries. In the course of time the watch tower eventually got fortified and in the end a fortress was erected on top.

The name – Montjuïc – has Jewish origins. Translated from old Catalan it means Jewish hill due to the old Jewish graveyard that was located there. Jews were not allowed to bury their dead within the city of Barcelona so Montjuïc served as alternative. The old Jewish cemetery does not exist anymore nowadays but Barcelona´s famous Cemeterio de Montjuïc is housed on top of the hill with more than one million burials since its opening.

Discover the Olympic History of Barcelona

Today the hill is a green oasis just outside the central city of Barcelona. Having being remodeled for the Olympic Games it turned from slums with shackles to a relax area for locals. You will find many parks and picnic places on the slopes where Catalan families will spend their Sunday afternoons. Also, the beautiful botanic garden can be found near the top of the hill.

In the 1920s the Olympic Stadium was constructed on Montjuïc. Being part of the remodeling for the World Fair of 1929 it was supposed to host the Olympic Games of 1936. However, Germany was elected to hold the Games in Berlin. As Spain and other nations feared that Nazi Germany would use the Games for their propaganda a boycott was announced and the alternative Peoples´ Games were planned to take place in the same year. Unfortunately, during the opening ceremonies the Spanish Civil War broke out and the Games had to be cancelled immediately.

The Olympic Stadium is accessible free of charge and forms part of the Olympic Ring, a formation of sports stadiums on the hill. Next to the swim stadium you will find the Palau de Sant Jordi, the former gymnastics arena. Nowadays, it serves as the main concert hall for Barcelona with a capacity of 20,000 people. Stars such as Shakira, Madonna, etc. have performed here.

Close to the Olympic Stadium you will find the exhibition ground of the 1929 World Fair. The grand palace overlooking Plaça Espanya houses the Museum of National Art of Catalonia. The area is famous for the Magic Fountain with lighting and water shows for tourists starting at 9 pm every day during summer months.

Climb up the slopes and enjoy the panoramic views. Have a drink in the cafeteria in the Olympic Diving Stadium and take stunning photos of the city.

The Barcelona Feeling recommends the private tour: “Discover the Olympic Mountain”. This walking tour is a great activity to discover all the aspects mentioned above. Get to know the multi-cultural quarter of Poble Sec with its trendy Pincho bars before walking over the hill and learn about the Olympic history of Barcelona. During the walk we will chose many paths off the beaten track.