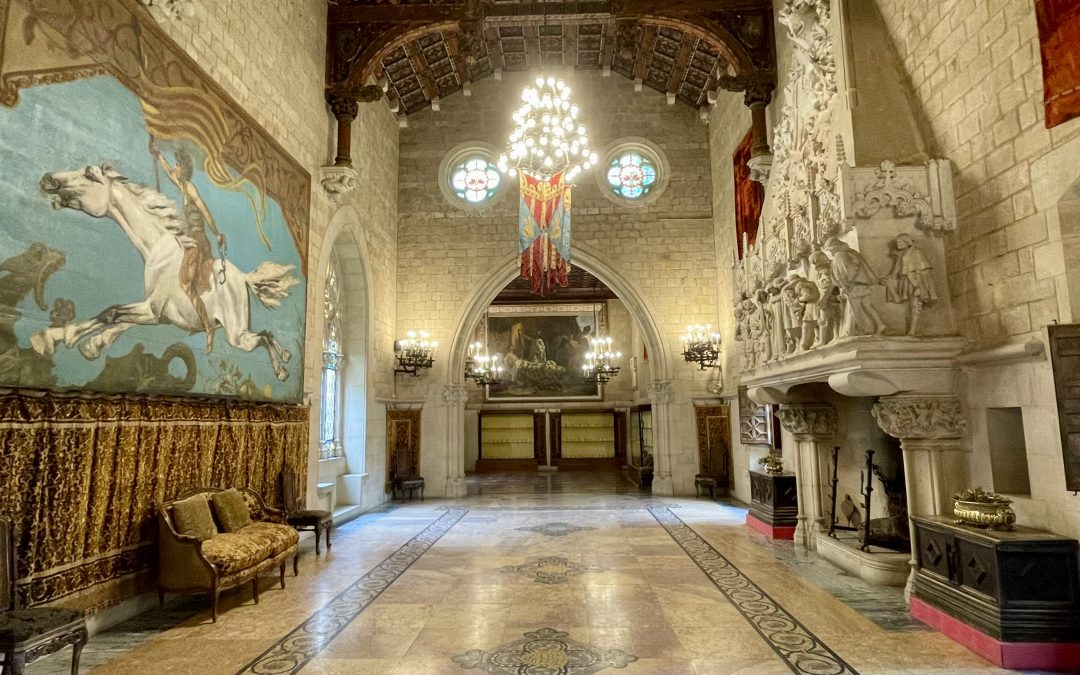 In Canet de Mar, a small coastal town north of Barcelona, ​​you can discover an impressive gem of modernism: Castell de Santa Florentina. The architects name, Lluís Domènech i Montaner, is associated with great building complexes in Barcelona, ​​such as the Palau de Música and the Sant Pau Hospital.

The town is situated at the foot of a green range of hills that run directly along the coast line. Coming from the train station, you walk uphill along the Rambla – lined with plane trees. On the left behind the church, follow the sandy path further up until a large iron gate forms the entrance to a park on the left in the middle of lush vegetation. Visitors have access if they book a ticket in advance.

A gem of Catalan Modernist architecture

Once in the park you will be standing in front of a massive building. Its modern part was built between 1898 and 1914 by the famous architect for his cousin who was a successful Catalan publisher. It is indeed a castle and its oldest part dates back to the 14th century. The towers are correspondingly massive. In keeping with the style, Lluís Domènech y Montaner created a congenial extension. Original, historical architectural parts from Catalonia are combined to form a new building that appears to be genuinely medieval to the ordinary person.

The building combines the best aspects of Modernism, namely its creative ideas based on building epochs such as the Gothic, and its own Art Nouveau-like elements. In any case, the quality of the craftsmanship of all the work is outstanding, be it wrought-iron lights, stained glass windows or a wide variety of decorative items. The gorgeous coffered ceiling of the hall alone is worth the trip.

Catalan nationalists will delight in the large-format paintings in the huge reception hall that cultivate the myths of the nation, while Spanish nationalists will delight in the bedroom where King Alfonso XIII slept in 1913, as a wall inscription proclaims. Everyone else enjoys the spaciousness of the public rooms and the comfort of the guest rooms.

Modernist highlights can be found in the dining room – and in the bathroom. The medieval red dining room is lit in the middle by a small glass dome that reveals the master of the concert hall in Barcelona, Palau de la Música. A bathroom is built into one of the towers, adorned with lush flower tiles and a floor-to-ceiling tub that you can step into like in a pond. You are sprinkled by a shower head made of brass.

When walking onto the terrace, the present is very close: just below, the coastal motorway crosses the apron of the fortress on high stilts: present and past are surprisingly close together on this tour of the Castell de Santa Florentina. On the way back to the train station, it is worthwhile to look at the smaller Modernism houses in the village. They are very beautiful in detail. It is also possible to dine or lunch in proper style in a Modernist ambience.

When discovering Catalonia you will notice that the region is full of medieval gems such as villages and castles or ruins. When visiting you will often have the feeling that time stood still and you feel transported back in time. No wonder that this was also discovered by film makers. Not only the castle was used for shooting movies and series but also cities like Girona with her medieval center, the Jewish Quarter, or the village of Besalú with a well preserved medieval bridge became film sets.

The Barcelona Feeling offers several options to learn about Modernism or getting to know medieval Barcelona and Catalonia: