by Christian Heide | Feb 8, 2020 | Barcelona, Barcelona Photography, Things to do in Barcelona 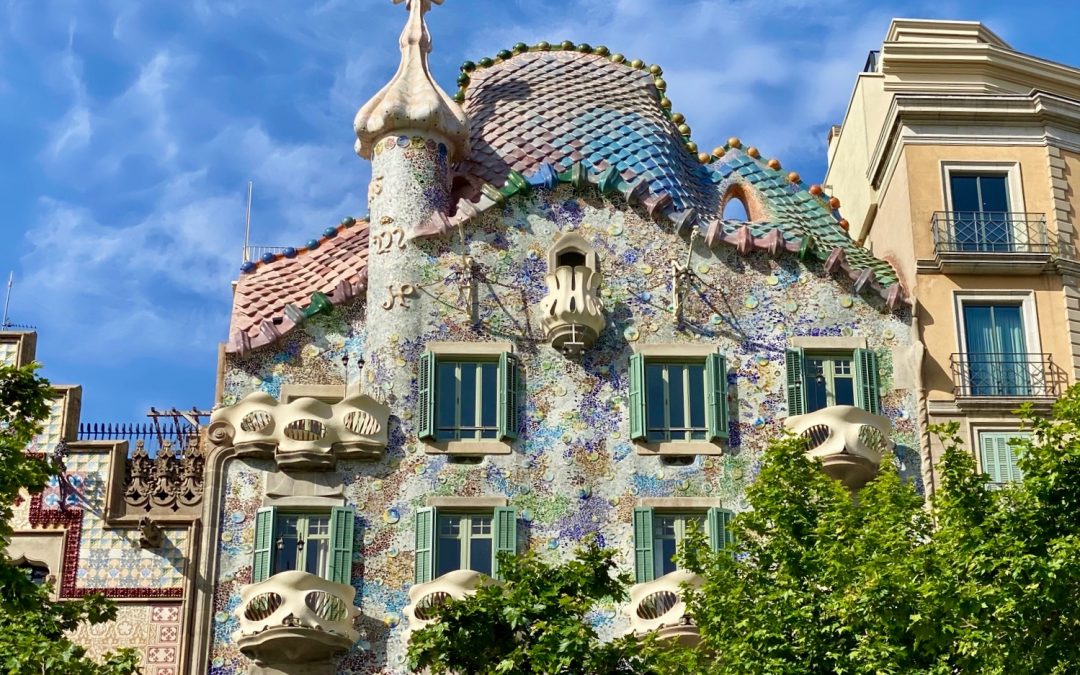 One of Gaudí´s master pieces is undoubtedly Casa Batlló – a residential building at the luxurious boulevard, Passeig de Gràcia.

In 1900 Josep Batlló bought the piece of land in the street that had become the most renowned address of the whole city for rich industrial families. Battló was a textile magnate owning several factories in Barcelona and surroundings. Batlló wanted a building that reflected his wealth and social status at that time. So he  commissioned Gaudí in 1904. The famous architect convinced him to refurbish the existing building instead of demolishing it and constructing a new one.

Casa Batlló – a must see during every Gaudí Walking Tour

As usual for modernist architects of that time Gaudí chose a theme that was related to nature. For Casa Batlló he decided on a maritime theme for the whole building:

The façade – mostly made out of trencadís mosaics – resembles the waves of an ocean. He chose a colour composition of green and blue: shades that can be found under water. Blue is also the central colour inside the central stairwell. And the main stairs leading up to the first floor have a reference to a tortoise. In general, one can say, that the architect Gaudí was most likely inspired by novelist Jules Vernes. The writer became popular around that time with his book “20,000 leagues under the sea”.

Next to naturalism another topic recurring in many modernist buildings are Catalan history and legends. Gaudí created symbolically a reference to Sant Jordi, the patron saint of Catalonia. Sant Jordi – or Sant George – was a knight who rescued a virgin from being eaten by a dragon. The roof of Casa Batlló resembles the back of that dragon. Sant Jordi plunged his sword into the dragon´s back and slew the creature. This is symbolised by the little tower with the cross being the handle of the sword.

Casa Batlló´s vernacular name is the House of Bones as certain columns on the façade look like bones and the balconies resemble skulls. Most likely Gaudí made another reference to the Sant Jordi legend: the bones and skulls of the virgins that were eaten by the dragon during his lifetime.

The pavement on Passeig de Gracia was renewed in 1997 with hexagon tiles that were originally designed by Gaudí for Casa Batlló.

We recommend you the following activities and things to do in Barcelona:

Feel like Gaudí – Tour and Mosaic Workshop: Discover Gaudí´s work and other modernist buildings along the Passeig de Gracia with a private tour guide during this two hour walking tour. Create your own mosaic in Gaudí´s technique in a one our workshop.

Casa Battló offers guided tours. In addition, the outside of the building can be seen during any Barcelona Bus Tour.

Magic Nights at Casa Batlló. The museum offers a combination ticket for a tour and an intimate roof top concert where usually local artists perform. Concerts range from Jazz to Flamenco.

Do not miss this modernist gem during your Barcelona trip!